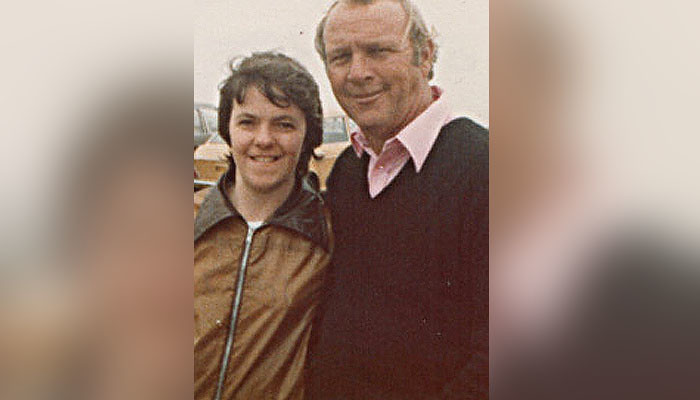 A true legend of golf

Arnold Palmer was a true legend of golf. Long before I went to my first Open when in my early twenties. I was already in awe of him. So you can imagine how I felt when I saw him at the side of the course being interviewed. I hung around and moved forward when the interview was finished.

Then I asked him would he mind getting his photo taken with me, and he agreed.

The media lady I never met since put her microphone on the ground and took us. Naturally I walked a few hole watching him as well as the other big names. Trying to squash in as many as possible whilst still seeing Christy O’Connor senior.

I didn’t start to get to know him until several years later. Beyond a slight nod to a familiar looking fan.

At that point he was playing in a special charity event with Lee Trevino.

Lee Trevino I knew at this point. It was against Christy O’Connor Snr and Des Smyth on Baltray Golf Course. I had gone along to catch up with my friends in the Smyth clan and support the Charity.

After the tournament finished, I was invited into the Sponsors area by one of the sponsors.

Just as Des and Arnie were arriving. Des performed the introductions. From then on Arnie always said a proper Hello.

After a few more years of seeing him at Opens I was upgraded to a cheek peck if the timing was right Wow!

The man and his game

I can’t say I really got to know him but what I saw impressed me as much about the man as about his game.

He treated the fans well, spending a lot of time signing autographs, and being photographed before the ban on cameras came in.

He was a warm personality and a great sense of humour.